The article has originally been published in The catalytic effects of DFI investment – gender equality, climate action and the harmonisation of impact standards by ODI.

Gender-lens investing has quickly become a priority for many development finance institutions (DFIs). The 2X Challenge initiative has resulted in increased DFI investment in women. Importantly, the 2X Challenge has also defined what constitutes a gender-smart investment. It has introduced investors to a solid framework, which can help assess the level of gender equality in their potential investments, and monitor the progress over time in their portfolio companies.

While this is all vital in building the foundation for assessing an investment’s gender potential, the next obvious step is to start looking beyond the numbers to better capture the impact of companies on women. This will not only help companies to adjust their products or programmes to better answer the needs of women, but importantly, switches focus from observing numbers to actually listening to what women have to say. This essay provides an overview of two studies that attempt to go beyond the numbers and evaluate outcomes. 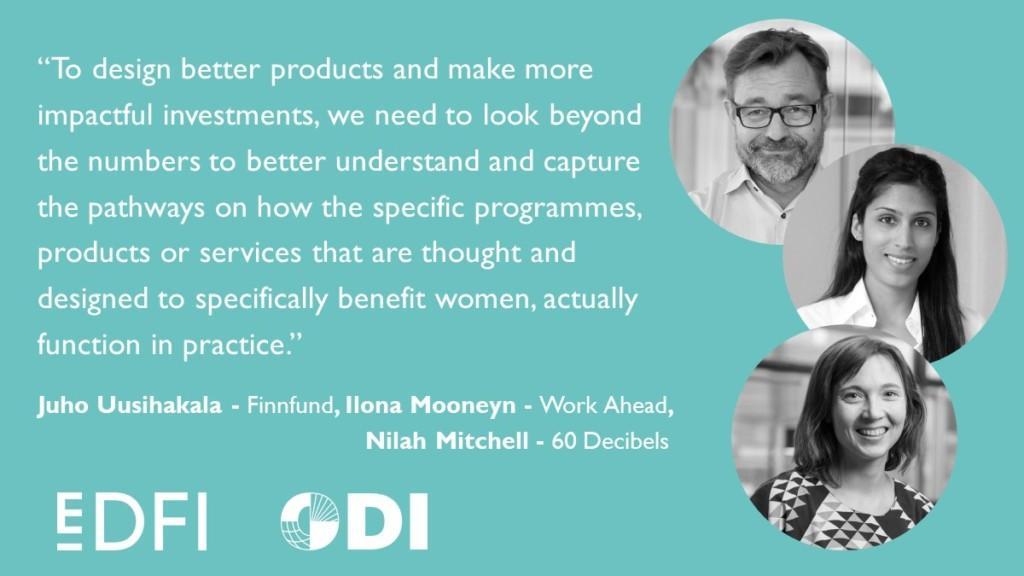 Gender equality and women’s economic empowerment are critical in achieving most Sustainable Development Goals. Studies (e.g. Moodley et al., 2019; World Economic Forum, 2019) have shown that inequality and exclusion of women from economic activities are robbing economies of billions of dollars every year and slowing down social development by decades.

In 2018, the G7 DFIs launched the 2X Challenge initiative to mobilise investments for women’s economic empowerment. The initiative now has 14 members and the original mobilisation target of $3 billion has been surpassed. An important part of the 2X Challenge has been the agreement of what constitutes a gender-sensitive investment. The 2X Challenge developed a concise list of criteria (2X Challenge, n.d.) that soon became standardised and a harmonised set of indicators for what ‘investing in women’ means. The indicators have also been included in the leading metrics catalogues IRIS+ and HIPSO.

The indicators mark an important step towards a harmonised and transparent approach in understanding the impacts of investment in women. The investee companies can readily report on the indicators, enabling the investor to track their progress over time.

But to design better products and make more impactful investments, we need to look beyond the numbers to better understand and capture the pathways on how the specific programmes, products or services that are thought and designed to specifically benefit women, actually function in practice. Do women benefit, and if yes,what is the causal mechanism? What are the impacts? To answer these questions, we need better data to go beyond the direct, output level metrics and to try to capture the outcomes of investments in women.

This essay discusses two cases of evaluating gender impact with novel data by Finnfund’s collaborators Work Ahead and 60 Decibels.

Smallholder farmers in Africa face many challenges, many of which are more severe for women (Muzari, 2016). Mobile surveying technology provider Work Ahead helped New Forests Company (NFC), an East African forestry company, to gather data and assess the impact of their cooperation with smallholders. Work Ahead prepared a 10-minute visual video survey of 50 questions that the company’s local teams administered to almost 200 people in two weeks. The team had six mobile phones, which the respondents used independently to view the questions and record their responses. The mobile survey was anonymous, available in two languages, and required no literacy skills. The company described the process as ‘fairly painless’.

The main objective of the survey was to understand if the company positively impacted women. Were women smallholder farmers poorer than their male counterparts? Were men and women both benefiting from the support services provided by the company? How did women’s and men’s opinions differ? Each question was assessed to determine whether women and men responded differently and if this difference was statistically significant.

The key findings include:

Work Ahead’s technology allowed NFC and Finnfund to measure gender impact and identify gender variance of perceptions. The findings provided actionable insights for the company to advance their work, for example to ensure be targeting for women in impact diversification activities. In addition, the technology and methodology themselves contributed to gender equality. Typical household surveys are carried out with the head of the household. Inviting both women and men to participate in the rapid survey set an example of gender equality.

In addition to obtaining valuable information on impacts on women, for Finnfund the survey provides a meaningful way to cooperate with NFC, and other portfolio companies, for better informed impact on women.

We have bright lighting in our house and for my children – who are students – they are not affected by smoke when studying. (Female, 32, 60 Decibels Lean Data study).

Between 2009 and 2018, the percentage of sub-Saharan Africa’s population with access to electricity increased from 33% to 48% (World Bank, n.d.). Despite this gradual increase, women disproportionally suffer from energy poverty. In 2020, impact measurement company 60 Decibels conducted a study for an organisation primarily targeting women in its distribution of clean energy products in Kenya. Using a 50-question survey tool, 60 Decibels’ research assistants interviewed 264 low-income customers via phone in their local language of Kiswahili. The interviews took approximately 18–20 minutes and were completed over the course of four weeks.

The aim of the study was to capture customer feedback, their perceptions of the product, and self-reported outcomes as a result of using the clean energy product to inform the company’s ground-level data-driven decision-making. In collecting and analysing gender-disaggregated data, and identifying significant differences or patterns, 60 Decibels was able to make recommendations on how the organisation could actively use the data (e.g. in marketing and messaging ) to reach new (e.g. poorer) customer segments, reduce challenges and explore new opportunities.

Some of the study’s key findings included:

Such data and insights, for a company with a clear strategy to benefit women, can help the organisation assess whether it is achieving the reach and impact it had set out to. And the more companies that do this, the more benchmarks we will have to judge whether a ‘product or service disproportionately benefits women’. In this instance the company is serving more women than men, and women seem to value the product the same or more than men, so it’s a clear win for gender impact. But what about a product that serves fewer women, but those women report a greater impact than their male equivalents (or the other way around)? Such data and the transparency it brings is a critical step towards reducing gender inequality and in demonstrating to gender-smart investors the ground-level and very real outcomes that they can help generate.

Results from the above cases are very encouraging. Three findings stand out. Both cases yield insights on the socioeconomic profile of the female customers and stakeholders and generate analytical data on outcome-level impacts on women with clear action points for companies. The tech-enabled data collection methods are cost efficient and provide nearly real-time data for companies to inform their management decisions. For DFIs such as Finnfund, the tech-enabled surveys offer much-needed evidence on the impacts of gender-lens investing. Finally, the data collection method enables women’s voices to be heard and acts as a vehicle for empowerment.

1) Participants were asked if they would say that women are now more empowered, compared to the time before the company’s presence in the village – 78% answered yes, 19% partially, 2% no, and 1% that they didn’t know.

The article has originally been published in The catalytic effects of DFI investment – gender equality, climate action and the harmonisation of impact standards by ODI.