The bank-in-phone wasn’t a joke after all 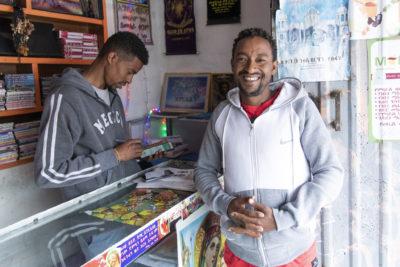 The shopkeeper grabs his phone and enters the code for the money transfer and payment service M-Birr, *818#. Soon, Eyob Lema’s phone receives a text message indicating that one hundred birr have been deposited into his account.

It is evening in the Ethiopian capital Addis Ababa. Horse entrepreneur Eyob Lema carries in his pocket a 100 birr banknote, his earnings for the day. The sum equals to about three euros.

“Before, I always promised myself to put aside any extra money. But the next day, I would spend it, almost without noticing. I never managed to save up.” Eyob Lema says.

Lema visits a familiar corner shop. The Abrham Spiritual Songs Shop sells incense, which is popular in Ethiopia, as well as candles and spiritual music CDs. Lema greets the shopkeeper, his friend Abrham Engidawi, and hands him the banknote.

The shopkeeper grabs his phone and enters the code for the money transfer and payment service M-Birr, *818#. Soon, Eyob Lema’s phone receives a text message indicating that one hundred birr have been deposited into his account. There it is, safely put aside.

“At first, I thought this sort of financial service was a joke,” admits Eyob Lema.

When his friend Abrham told him two years ago that he was considering adding the money transfer and payment service to his shop’s range, Lema was sure his friend would face problems.
“In our neighbourhood, there are banks on almost every corner, but they do not serve lower-class people like us. You can’t go into a bank and deposit 20 birr (EUR 0.60).”

The M-Birr representatives who came to Engidawi’s shop explained to the shopkeeper and the suspicious Lema that the new money transfer service is intended specifically for low-income people, i.e. for transferring small sums with low costs. With M-Birr, cash savings can be deposited at any of M-Birr agents and money can be sent to another person, either to their account or to be withdrawn as cash. The service can also be used for paying employees’ salaries. The account number is the same as the account holder’s phone number.

Many African countries already had similar mobile services. Kenya’s most popular service, E-Pesa, was founded already in 2007, but it requires an internet connection and a smart phone. In Ethiopia, the majority of mobile phone owners, as much as 70 percent, use a traditional push-button model that does not have internet access. That is why M-Birr has been designed to work in the mobile phone network, which means that it can be used with an ordinary push-button phone and the service works through text messages. No need for the internet or a smart phone.

Concern turned into a business idea 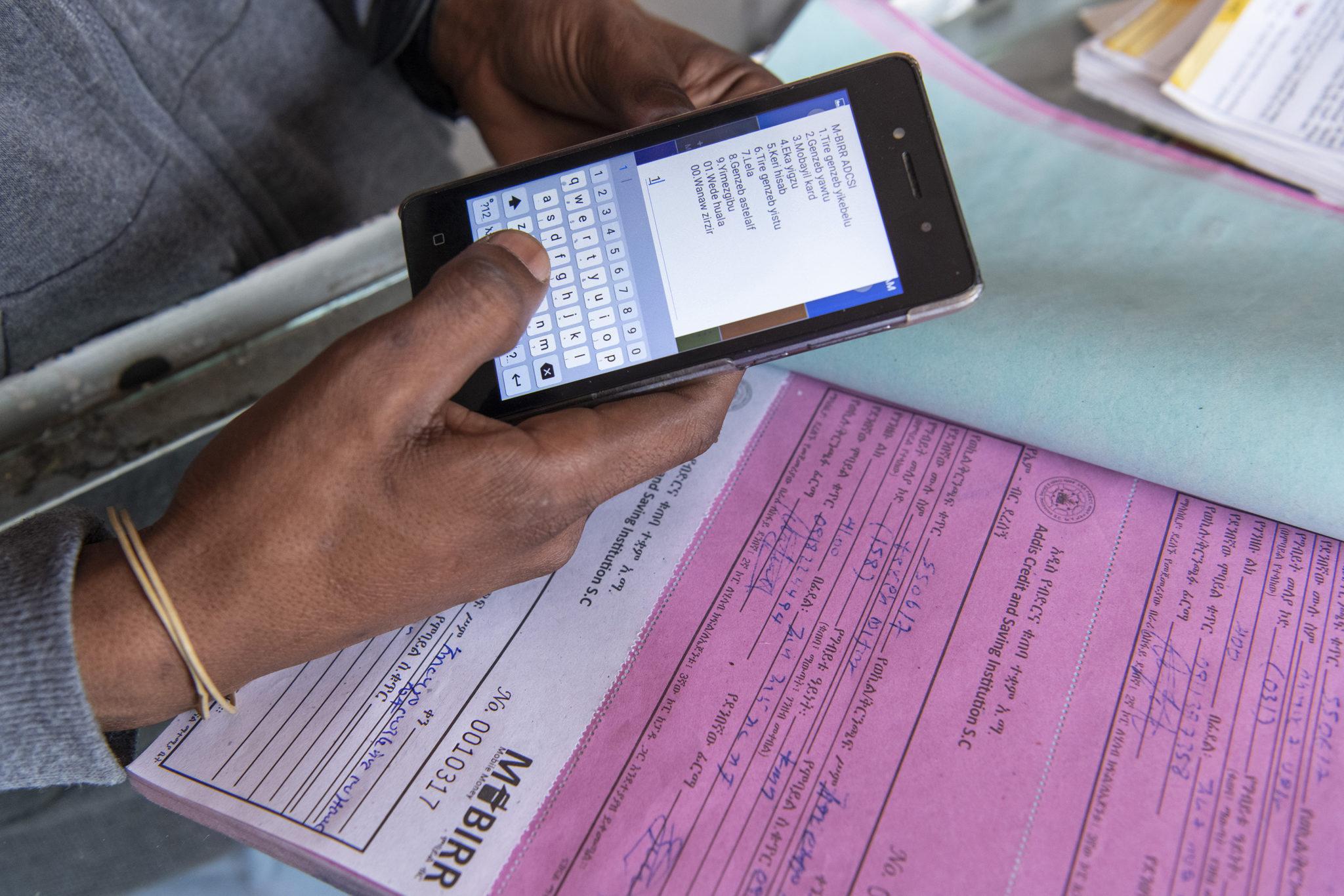 According to M-Birr representatives, Engidawi was ideally positioned to become a service provider, since his store was centrally located and he already sold scratch cards offering mobile phone talk time. M-Birr operates through small privately-owned shops, where Ethiopians can register and deposit and withdraw money. Customers can also use the service to buy talk time for their mobile phone. The service providers receive a small commission for each transaction.

Shopkeeper Abrham Engidaw decided to give it a go.

“In my neighbourhood, other shopkeepers had begun to use this service, and it had helped them to make the rent at the end of the month, as they had money in the bank. I too wanted to save money, and so I included the service in my shop’s range.”

The sceptical Eyob Lema became Engidawi’s first customer. In two years, M-Birr has revolutionised the way the friends use money.

“We no longer carry money in our pockets when going around town, which is much safer. It protects us from robberies but, more importantly, it prevents us from wasting money,” says Eyob Lema.

Now they actually have savings.

“We have been able to save so much money that we are planning to open a grocery shop together with Abrham.”

M-Birr is Ethiopia’s first mobile banking service which offers low-income people access to the official money economy. During its four years of operation, M-Birr has expanded to almost the entire country. In early 2019, the service had 1.3 million users and 8,100 agents like Engidawi. There are more than one hundred million inhabitants in Ethiopia, so there is room for growth.

M-Birr has also changed the payment of social assistance in Ethiopia. In the past, the assistance payments were transported by car to small villages in rural areas. Now, already one million Ethiopeans get their assistance payments at M-Birr agents. Customers only need a M-Birr customer card; a mobile phone is not required.

Sister no longer has to wait for her money 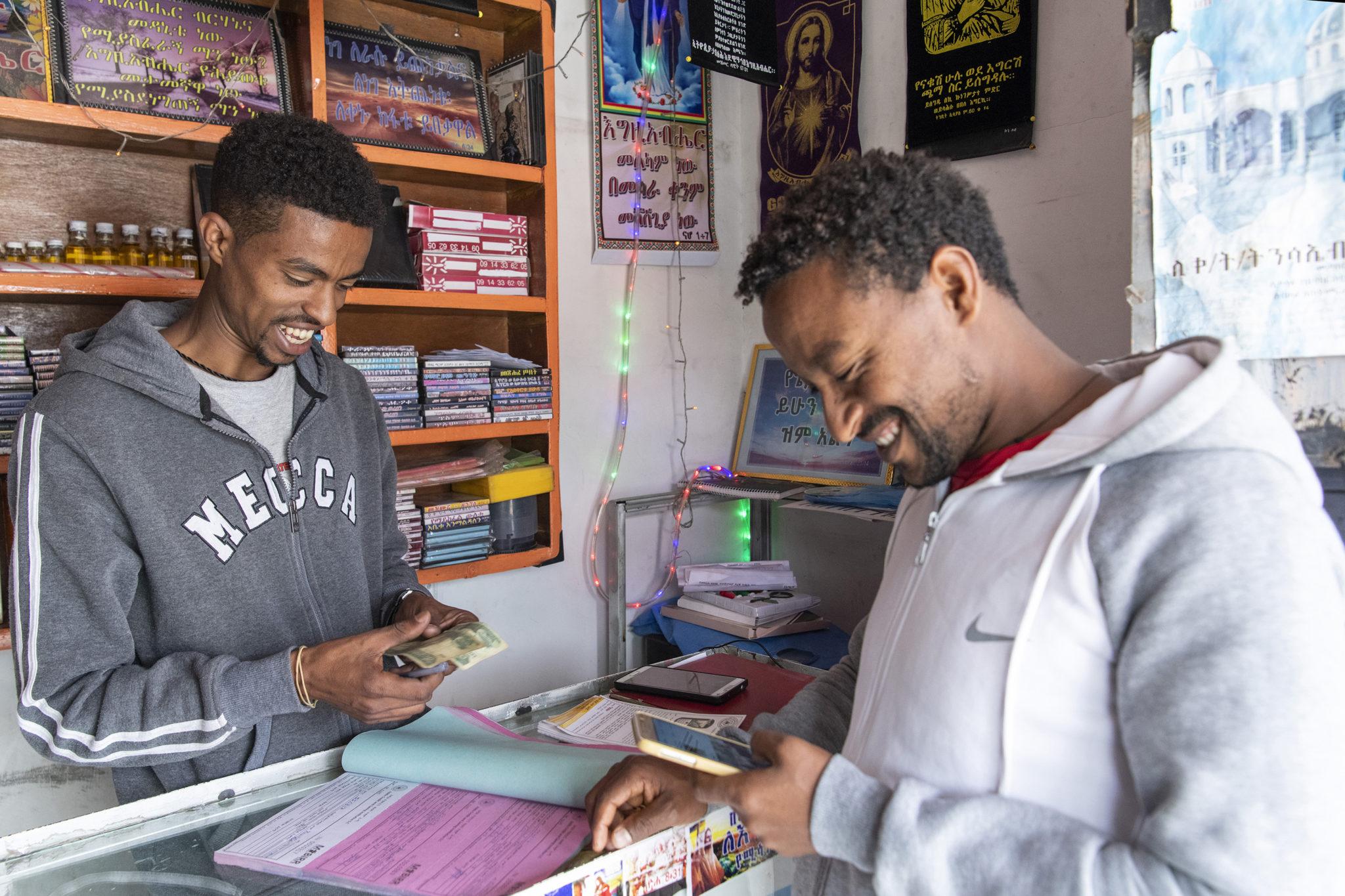 Engidaw and Lema, who run their small businesses in the capital, are among those who are boosting Ethiopia’s evolving economy. The M-Birr service has facilitated the men’s everyday lives and saved them both money and time.

“I have also registered my family and friends to M-Birr,” says Eyob Lema.

Engidaw and Lema take care of their relatives in different parts of the country and send them money with M-Birr via telephone. M-Birr charges a commission of 14 euro cents per transfer, which is considerably less than the commission of traditional money transfer firms.

Both men have a sister who attends university and whom they help with tuition fees.

“In the past, I always had to interrupt work to go transfer money. I worried whether she would receive the money from the bank on the same day. It didn’t always happen. Now I handle the transfer by phone and my sister can withdraw the money from a nearby M-Birr agent,” Eyob Lema explains.

“However, we are sure that people living in rural areas benefit from the service even more than we do. The distances are long, and people spend a lot of time travelling to get their money,” the city-dwelling men say.