The development financier Finnfund, has commenced to calculate the climate impact of its entire investment portfolio annually. The calculations show that Finnfund’s investments in forestry sequester more than half a million carbon dioxide equivalent tonnes (tCO2eq) in the atmosphere. With its investments in clean energy, Finnfund avoids emissions in developing countries by 64,000 tCO2eq annually. The combined amount of emissions generated, a carbon footprint, was 127,000 tCO2eq.

Finnfund has previously assessed the potential for emissions reductions in forest and energy investments before making investment decisions. Now, the calculations have been extended to cover all investments – both direct and indirect, new and existing, and relating to carbon footprints, avoided emissions and carbon sequestration. The comprehensive calculation of the 2016 investment portfolio, which has now been completed, provides an opportunity to analyse and develop the portfolio based on measurable and annually monitored quantitative data.

“Calculating the climate effects for the entire portfolio is an important tool for us in developing our activities and in affirming the positive impacts on the climate. Mitigation of and adaptation to climate change are among the key objectives of Finnfund’s operations”, says Finnfund Managing Director, CEO Jaakko Kangasniemi.

Looking at the climate-related effects of Finnfund’s entire investment portfolio, the results reflect a long-term focus on sustainable forestry and renewable energy. Thanks to several forest investments, carbon dioxide sequestration has a major positive impact on the climate, sequestrating from the atmosphere a total of 530,000 tCO2eq, which is equivalent to 8,463 tCO2eq per EUR one million invested. The total amount of carbon sequestrated by forestry investments corresponds to the annual emissions of the Finnish city of Lahti, for example (561,000 tCO2eq in 2015). Three-quarters (75%) of CO2 sequestration occurs in Africa.

Currently, Finnfund-funded companies manage a total of 867,000 hectares of forest, of which 814,900 hectares are covered by the FSC’s® (Forest Stewardship Council) international certification on sustainable forestry. However, the initial approach to these calculations has been deliberately cautious, taking into account only area, tree species, rotation time, above-ground biomass and margins of error. For example, the calculations do not take account of the impact of soil, below-ground biomass or changes in land use, and are exclusive of natural forest projects. The protected areas covered by the certification requirements are also excluded, and the calculations do not take account of the final use of the wood. Carbon sequestration has been calculated using the AFOLU Carbon Calculator, which has been developed by the USAID and Winrock.

That is about 362 tCO2eq per EUR one million invested, which is about the average level in developing countries. The emissions calculations have taken into account only the operative activities of each company, i.e. they do not include the construction phase, for example. Since the data used in the calculations is based on country and sectoral averages, the CO2 emissions intensity of energy production in many developing countries has a significant impact on the calculations, regardless of the company’s actual energy use and energy sources.

The total avoided emissions of renewable energy are 64,000 tCO2eq, or 911 tCO2eq per EUR one million invested. The avoided emissions per EUR one million invested are considerably higher than the carbon footprint of the investment. The calculations take account of the investments in wind energy, bioenergy, hydroelectric energy and solar energy. For calculations of avoided emissions, the IFI Harmonized framework (International Financial Institution Framework for a Harmonised Approach to Greenhouse Gas Accounting) has been followed.

Operations aimed at mitigation of and adaptation to climate change

Finnfund’s development of carbon calculations stems from its desire to better understand the climate impacts of all its investments. Mitigation of climate change and support for adaptation to it are among Finnfund’s key objectives and development achievements. This is also reflected in Finnfund’s focus on climate change mitigation and adaptation activities, with investments in renewable energy, sustainable forestry, and agriculture and financial institutions. The last of these also includes funding for microfinance. Finnfund’s investments are also a key part of Finland’s official climate-related financing.

For example, in 2017 Finnfund made payments of a total of EUR 75.5 million to climate-related projects. Of this funding, 45.4% to the mitigation and 31.8% to adaptation, with the remaining 22.8% for both mitigation and adaptation.

The starting point for the calculations are the guidelines of Greenhouse Gas Protocol. These take into account the direct and indirect emissions of each company’s own production and purchased services (scope 1 and 2, as well as 3 upstream), but not post-production use (scope 3 downstream). The impacts are attributed to Finnfund in proportion of its financing share. The calculations are made in cooperation with the consultancy Navigant. There have also been discussions with other specialists and stakeholders. 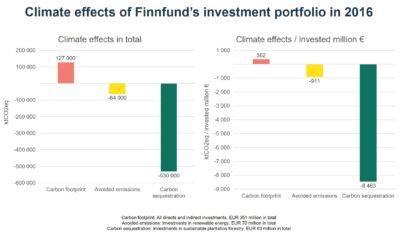 Finnfund invests in a solar panel factory in Thailand

Collaborating to accelerate investment in climate adaptation and resilience