Impact study: The Link between Power Investments, Incomes and Jobs in Cape Verde

Cape Verde is a small state comprising ten islands, approximately 500 km off the west coast of Africa. Total installed power generation capacity has increased from 90 MW in 2009 to 199 MW in 2016. The increase has been driven by investments in thermal power generation and Cabeólica wind farm of 25.5 MW that raised the share of renewable energy generation in Cape Verde from 0 to over 20%.

Despite Cabeólica, a great majority, 80%, of power generation in Cape Verde is still from thermal power plants that use imported diesel or fuel oil. Cape Verde is committed to achieve 100% renewable energy rate by 2025.

The study was commissioned by African Finance Corporation and Finnfund, and conducted by Teodora Nenova, Max Markrich and Rene Kim from Steward Redqueen, http://www.stewardredqueen.com/en/home

The study was conducted in spring 2018 and followed a pretested methodology of how power availability and affordability affect economic output. This methodology consists of construction of an electricity price model, an analysis of outage data and estimation of the related economic output and employment increase using an input-output model and employment intensity data. 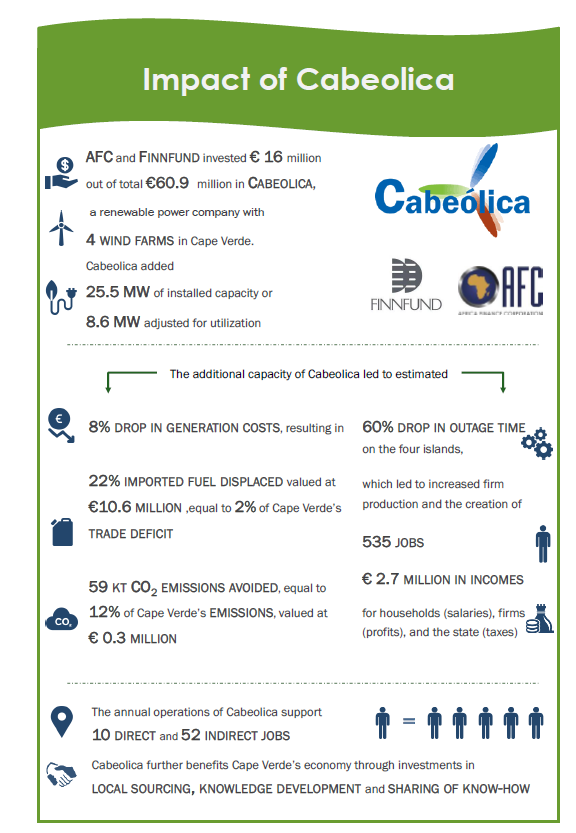 The Link between Power Investments, Incomes and Jobs in Cape Verde (pdf)