Esther Mwikali joined Penda Health in 2015 with previous experience from a hospital in Nairobi. “I was looking for something different, I wanted to reach more people in the community”, she says. At that time, Penda was more like a startup company. The second medical center had just opened in Umoja and Mwikali started there as a Clinical Officer.

Only two months later, she was offered a position as Senior Clinical Officer coordinating the team. “I was still learning Penda”, she says. “My manager simply told me that they thought I had what was needed to lead the team and I was really excited, even though I had no previous leadership experience.”

Already the job interview was a showcase of the company culture: Instead of just going through her skills, the conversation circled around culture and leadership. It was a true dialogue with focus on personality and potential.

In what way does Penda Health encourage women to become leaders?

“At Penda Health, everyone is a potential leader. Internal promotions are a priority, with training and mentorship high on the agenda. From the first day, employees are encouraged to share their thoughts and raise their voices. When I came to Penda, I was surprised that I was expected to participate in the decision-making. I mean, I was just a junior staff member and suddenly my opinions were considered important.

The purpose is to involve everybody, both customers and employees. Patient experience is very important and who understands them better than the ones working with them every day? It makes sense but it’s still quite an unusual approach.

It was almost uncomfortable at first. Is this a test? Why are they interested? After a while, I realised that there really was no pecking order at Penda. My opinions and thoughts really were just as important as those of senior staff. “

When Finnfund assesses the gender equality in the portfolio companies, Penda Health always stands out: nearly 70% of their staff are women. Women can be found at all levels in the organisation, from support staff to board of directors. Half of their management team are women. The CEO is female.

This is a story of Esther Mwikali who joined Penda Health in 2015 and now works as an Area Manager. 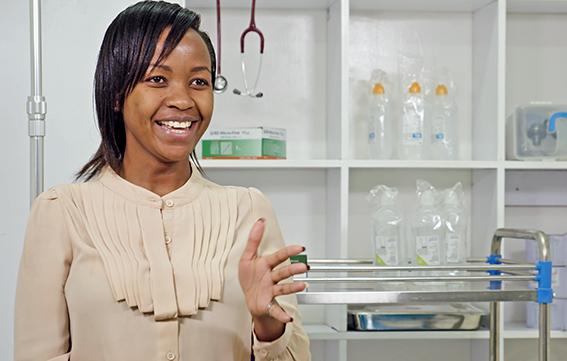 How has your own career path been?

“By the end of 2020, Penda Health will have 19 medical centers around Nairobi. The expansion has been fast. At first, I got promoted to branch manager. Opening a new medical center was a great opportunity for me – I hired a staff of 14 and was responsible for marketing and took care of all the paperwork of opening a new branch. I started in March and we opened in May, and every day was about learning new things.”

“My center was also the first one to roll out an electronic medical record system, which was yet another challenge. The support we have in the company is amazing! Everyone thought I could do it so I really didn’t have a choice!”

How did leadership become a passion for you?

“My passion as a clinician was treating the patients. After Penda Health offered me leadership opportunities, growing and becoming a leader became my passion. I did not want to lose contact with the patients though, and because of Penda’s customer-oriented approach I am still very much involved in the daily work at the 4 medical centers I am responsible for. As an Area Manager, it is now my turn to look for new leaders.

The way Penda operates is especially favourable for women as we usually want to build relationships. Women are interested in giving and receiving feedback. We are so focused on customer experience and building reliable healthcare that you really have to be a people person in order to succeed.

Every manager needs to consult both customers and the staff before making decisions. Sometimes it takes a long time as Penda Health today employs over 400 people. You just can’t roll things out without listening to the people.”

You have a baby at home – how does Penda support your work/life balance?

“My baby is now 4 months old and I’m working flexible hours. My manager was clear with what was expected of me when I returned from maternity leave – and there was an onboarding plan. Goals were set on a reasonable level. These things are not only written down as policies, it’s simply the company culture. And gender equality goes both ways: men are also entitled and encouraged to take paternity leave.

The ongoing pandemic had changed things during my absence, and it could have been hectic to balance between the busy life at the office and the baby at home. My manager actually suggested that I book offline time with my baby in my calendar! So now I have an appointment with my baby every day after work.

Sometimes Penda Health sees more in people than they do themselves. I never knew that I was a natural born leader. Penda made me feel that I can be anything I want and gave me opportunities I could never even dream of.”

At Penda Health, career paths are open for everyone